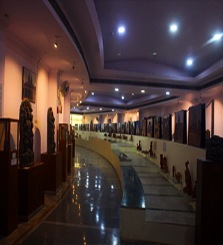 Discover the rich history of Jharkhand

Jharkhand is home to a diverse spectrum of cultural, historical, and aesthetic treasures. It has been known for its mineral wealth for a long time. The necessity to give Jharkhand's cultural history its due respect and value has just become apparent. As a result, since the state's creation in the year 2000, significant efforts have been made. The building of the State Museum in Hotwar, Ranchi, in 2009 was a significant step forward in this direction.

Way back in 1974, Ranchi Museum was established on the premises of the Tribal Research Institute at Morabadi. The scarcity of space and other infrastructure facilities was a trammeling constraint.

Currently, the State Museum has multiple galleries that exhibit various parts of cultural heritage, particularly those relating to the state of Jharkhand. We have galleries that are divided into categories to display anthropological traits, particularly those relating to tribal life. Art artifacts exhibiting various sculptural styles and iconographic representations can be found in the sculptural area. Pottery and other objects were discovered during archaeological excavations, for example.

They have shown the lifestyle of many tribal people in Jharkhand in the Ethnological Gallery. This museum displays their daily customs, agriculture, instruments, arsenals, and weapons.

The most amazing waterfalls in Jharkhand to visit